The immunohistopathological features of prurigo Hebra

Until now the pathologic mechanisms of prurigo Hebra (PH) is still understood. Earlier study the genetic inheritance of PH showed the multifactorial pattern. Considering the genetic inheritance and the existence of allergic reaction to insects bite in all patients, might be the mechanisms followed hypersensitivity reactions. The purpose of this study is to evaluate the general and specific local inflammatory features of early and late lesions of prurigo Hebra (PH). Fifty biopsy specimens of early and late lesions of prurigo Hebra patients were processed with haematoxylin-eosin (HE) and immunoperoryde (lP) staining using monoclonal antibodies against specific inflammatory cells namely B cells, T cells, helper T (CD4+) cells, supressor T (CD8+) cells, Langerhans cells, and antigen presenting cells (APC) that expressed HLA-DR antigen. HE-stained specimens: In early lesions, PMN cells were few, while eosinophils were present in great quantity and independent of mast cells and plasma cells; this feature was similar to that of insect bite reaction. IP-stained specimens: In late lesions, the amounts of lympho-histiocytic infiltration consisting of T cells, CD8+ cells, HLA-DR-expressing APCs were greater than those of early lesions, although it was not statistically significant. An exception was for the CD4+ cells, whose number in early lesions was significantly higher. The ratio of CD4+ to CD8+ in early lesions was higher than in late lesions (3/1: 2/1). This suggested that CD4+ cells were predominant. B cells, which were normally absent, appeared in small quantity in both early and late Lesions. The presence of B cells was not statistically correlated with T cells or eosinophils. The number of Langerhans cells in late lesions was higher than in early lesions. There was a strong correlation (r=0.39) between T cells and HLA-DR-expressing antigen-presenting cells (APCs/HLA-DR). Those cells found in great qunntity suggested that PH patients usually expose to extrinsic factors. In some cases with severe condition, the presence of eosinophils was more profound and was statistically significant. It is conclude that immunohistopathological mechanisms of PH follow the mixed types (one and IV) hypersensitivity reaction. (Med J Indones 2001;10:1-15) 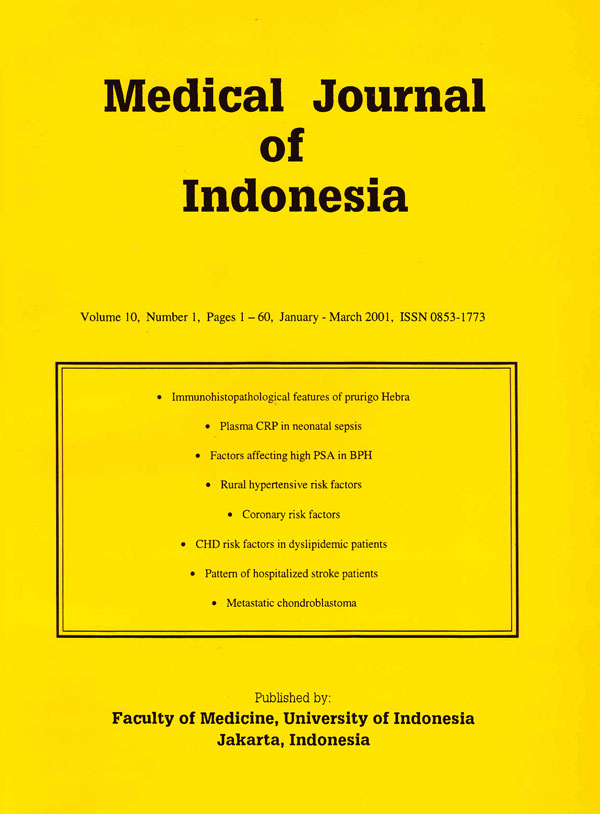