Maternity blues disorder (MB) is common, and it is usually undiagnosed. This study to identify several risk factors related to MB. Subjects were pregnant women who had antenatal and delivery at the Persahabatan Hospital (RSP) Jakarta from 1 November 1999 to 15 August 2001. Consecutive sampling and was followed-up until two-week postpartum. Those who ever had psychiatric disorders (schizophrenia or other psychotic disorders) were excluded. MB and ante partum depression (APD) detected by using Edinburgh Postnatal Depression Scale (EPDS). Husband's mental status based on Symptom Check List-90 (SCL-90) respectively. Among 580 subjects, 25% suffering from MB. Compared with those who did not have APD, those who experienced it had more than three-fold increased risk to be MB [adjusted hazard ratio (aHR) = 3.57; 95% confidence interval (CI) = 2.54;5.03]. Those who had not healthy baby on the first 5 days afterbirth than who had healthy baby had twice increased risk to be MB (aHR = 2.21; 95% CI = 1.34 ; 3.66). Who had husband with problem in mental health had 1.9 increased risk to be MB (aHR = 1.91; 95% CI = 1.36 ; 2.68). Stress during pregnancy had 1.6 increased risk to be MB (aHR = 1.59; 95% CI = 1.14 ; 2.25). To control MB, special attention should be paid to women who had APD history, who had unhealthy baby on 5 first days afterbirth, who had husbands' mental health problems, and whoÂ had stress during pregnancy. (Med J Indones 2006; 15:74-80) 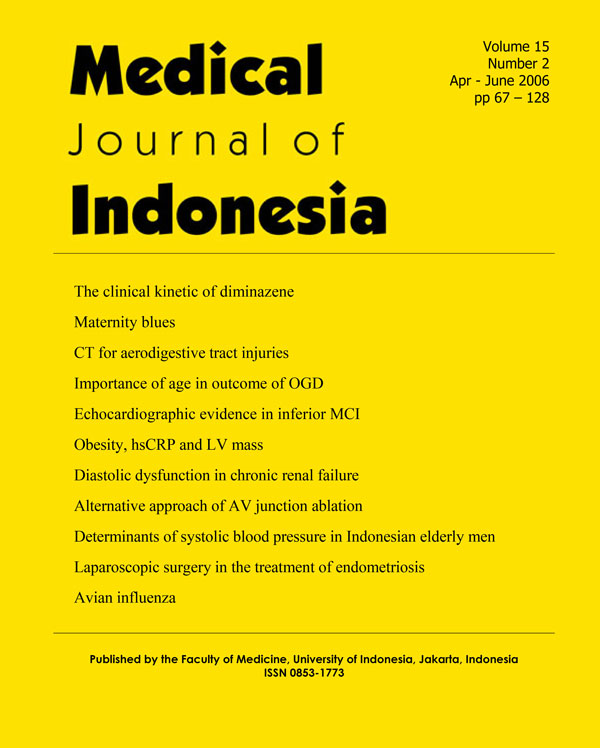