Background: Insulin resistance and central adiposity are frequent disorders in PCOS women, which are marked by biological marker dysregulation related to this metabolic abnormalities. Association between adiponectin and insulin resistance has been investigated in many studies, while only a few studies were done in PCOS patients. This study is to determine the association of T45G polymorphisms in Indonesian population with PCOS biological markers and their influence to adiponectin serum.

Methods: Fifty-two PCOS patients and 52 normal ovulatory women without hyperandrogenism as control subjects were included. Blood samples were collected between day 3 and 5 of a spontaneous menstrual cycle at 7 to 9 am, after overnight fasting. Serum levels of FSH, LH, testosterone, SHBG, glucose, insulin, lipid profile and adiponectin were measured. Insulin resistance was estimated by HOMA-IR, HOMA- β, and SHBG. T45G gene polymorphisms were determined by PCR after genomic DNA was obtained from peripheral blood of patients and control subjects. 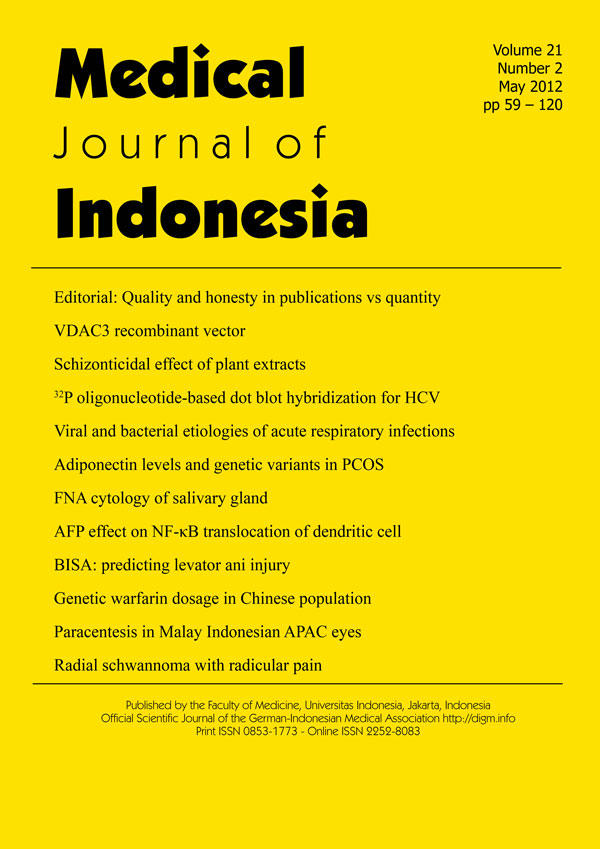 Published
2012-05-01
How to Cite
1.
Pangaribuan B, Yusuf I, Mansyur M, Wijaya A. Study on the influence of adiponectin genetic variants and adiponectin levels among Indonesian women with polycystic ovary syndrome. Med J Indones [Internet]. 2012May1 [cited 2023Feb.8];21(2):83-1. Available from: https://mji.ui.ac.id/journal/index.php/mji/article/view/483
Download Citation
Issue
Vol 21 No 2 (2012): May
Section
Basic Medical Research