The final most common pathway for the majority of coronary artery disease is occlusion of a coronary vessel. Under normalÂ conditions, antithrombin III (AT III), protein C, and protein S as an active protein C cofactor, are natural anticoagulants (hemostaticÂ control) that balances procoagulant activity (thrombin antithrombin complex balance) to prevent thrombosis. If the conditionÂ becomes unbalanced, natural anticoagulants and the procoagulants can lead to thrombosis. Thirty subjects with acute coronaryÂ syndrome (ACS) were studied for the incidence of antithrombin III (AT III), protein C, and protein S deficiencies, and the result wereÂ compare to the control group. Among patients with ACS, the frequency of distribution of AT-III with activity < 75% were 23,3% (7Â of 30), and only 6,7% ( 2 of 30 ) in control subject. No one of the 30 control subject have protein C activity deficient, in ACS withÂ activity < 70% were 13,3% (4 of 30). Fifteen out of the 30 (50%) control subjects had protein S activity deficiency, while protein SÂ deficiency activity < 70% was found 73.3.% (22 out of 30). On linear regression, the deterministic coefficient of AT-III activityÂ deficiency to the development ACS was 13,25 %, and the deterministic coefficient of protein C activity deficient to the developmentÂ of ACS was 9,06 %. The cut-off point for AT-III without protein S deficiency expected to contribute to the development of vesselÂ disease was 45%. On discriminant analysis, protein C activity deficiency posed a risk for ACS of 4,5 greater than non deficientÂ subjects, and AT-III activity deficiency posed a risk for ACS of 3,5 times greater than non deficient subjects. On binary logisticÂ regression, protein S activity acted only as a reinforcing factor of AT-III activity deficiency in the development of ACS. Protein CÂ and AT III deficiency can trigger ACS, with determinant coefficients of 9,06% and 13,25% respectively. Low levels of protein CÂ posed a greater risk of ACS than low levels of AT III. Protein S deficiency was a reinforcing factor on AT-III deficient to developmentÂ of ACS. The cut-off point of AT-III without protein S deficiency expected to give single vessel disease was 45%, and 9,5% for theÂ development of triple vessel disease. (Med J Indones 2002; 11: 87-92) 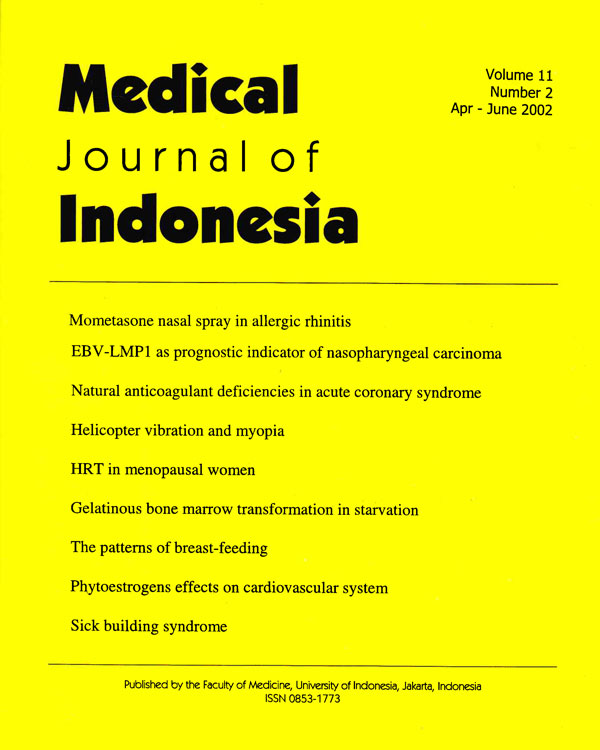