Countries in the Asia-Pacific region differ widely with respect to their nutritional intake and nutritional status. The highest daily energy and proportion of fat intakes of the population is shown by the New Zealanders (total energy 3475 Kcals; fat proportion 37.2% or 1293 Kcals), while the lowest is the Siamese (total energy 2288 Kcals; fat proportion 13.1% or 300 Kcals). The Indonesian on the other hand, is at the third from the bottom (total energy 2631 Kcals; proportion of fat is 14.5% or 381.9 Kcals). Animal fat contributes to 29.7% (1033 Kcals) of the total daily energy intake of the New Zealanders (total 3475 Kcals), and the mortality rate coronary heart disease (CHD) is also the highest (228 per 100,000 populations for men and 173 for women). In contrast, the proportion of animal fat in Indonesian menu is only 1.47% (38.7 Kcals) of the total daily energy intake, while the CHD mortality rate is still below 50 per 100,000 for both men and women. Compared to the same values fifteen years before, animal fat intake of the New Zealanders has a decrease of 90%, Australian 88%, Philippines 99%, however the Indonesian on the other hand, has an increase of 157%. In New Zealand and Australia, the proportion of mortality attributed to cardiovascular disease (CVD) for men accounts for over 40% of total mortality. Japan however, the proportion mortality rate for CVD is only less than 30% of total mortality. In this level, Japan places itself among less industrialized group such as Malaysia and the Philippines. In the case of cerebrovascular (stroke) mortality however, Japan belongs to the highest category group. It seems that apart of high fat intake, stress and possibly also other factors play a major role in the development of stroke. The mean Indonesian total energy intake is 2631 Kcals, consisting of 8.7% protein (228.9 Kcals, 52.2 g), 76.8% carbohydrate (2020 Kcals, 505 g), and 14.5% fat (381.9 Kcals, 42.4 g). Animal fat intake is only 4.3 g/day (38.7 Kcals) which is 1.47% of the total energy intake. Although appears to be low, but it has a 157% increase if compared to the same value fifteen years before. Indonesian CHD mortality rate is still relatively low (below 50 per 100,000), however it is only a matter of time that the this value will soon increase in line with the increase of fat (especially animal fat) and total energy intakes. (Med J Indones 2004; 13: 252-7) 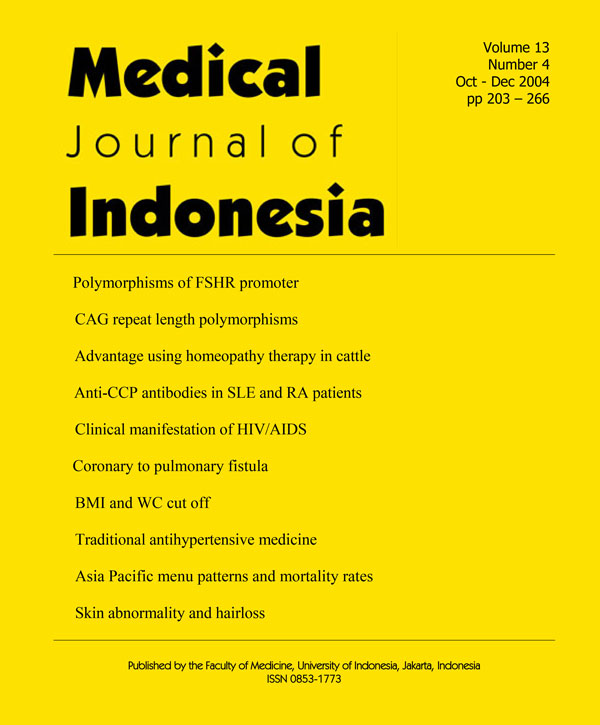