Non Steroidal Anti Inflammatory Drugs (NSAID) have been associated with a sudden and sustained rise in the incidence of gastrointestinal ulcer complications. The aim of the study was to reveal the endoscopical abnormalities found in the duodenum & proximal jejunum due to NSAID. Thirty eight patients taking NSAID for their arthritis or rheumatism were included in this study. Gastro-duodeno-jejunoscopy was done with Olympus PCF-10. The endoscopical appearances of NSAID entero gastropathy were evaluated with a scoring system. The NSAID-entero-gastropathy appearances were endoscopically seen as hyperemia, erosion and ulcer. From all patient recruited, 7.9% complaint of diarrhea and 71.1% complaint of dyspepsia. Endoscopically, in the duodenal bulb we found 79% cases of hyperemia, 39.5% cases of erosion and 7.9% cases of ulcer. In the second part (descending part) of the duodenum we found 28.9% cases of hyperemia, 15.8% cases of erosion and 2.6% case of ulcer. In the jejunum, we found 7.9% cases of hyperemia, 2.6% case of erosion and no ulcer. It is concluded that the most frequent abnormal endoscopical appearances in NSAID- enteropathy was hyperemia. The most frequent site of NSAID-enteropathy abnormal findings was in the duodenal bulb. (Med J Indones 2005; 14: 225-9) 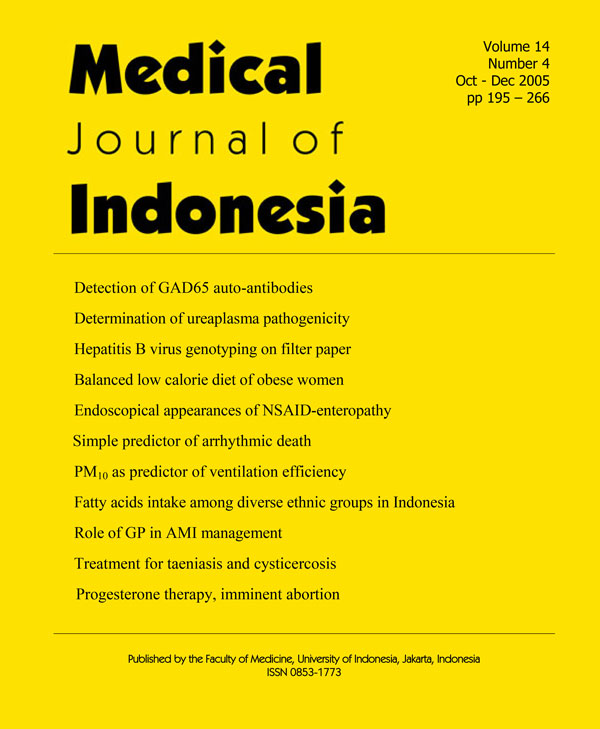