The objective of this study is to analyse the testes biopsy and to know the lnrmone level reproduction of pig tail macaque (Macaca nemestrina) injected with testosterone enanthate (TE) and depot medroxyprogesterone acetate (DMPA). Six pig tail male macaques, age 6 - 8 years old were used as sanrple. Three months after adaptation period, each animal was injected intra muscularly with 32 mg TE each week starting at week zero up to the sixth week. The treatment was continued every 3 weeks after the sixth week up to the 24th week. 40 mg of DMPA was injected intramuscularly at week zero, and continued every week up to week 18. Volume of the testes was taken every three weeks and blood samples for examination of gonadotropin hormone and steroid hormone were taken at 6 week intervals. Testes biopsy was perfomed at week 30 and week 48. Preparation of testes histological slides were made using the paraffin method and stained with hematoxylin-Eosin (HE). The results of this study showed that both testes volume decreased i.e. 18.35 cm3 ± 9.35 and 19.02cm3 ± 10.88 (at week zero) to 6.70 cm3 ± 3.80 and 7.02 cm3 ± 4.61 (lowest volume at week 21). In recovery period, the testes volume increased to 20.34 cmr ± 7.87 and 21.75 cm3 ± 7.09. The diameter of the seminiferous tubules and the score of spermatogenesis (right and left testes) at week 30 were 0.13 mm ± 0.027 and 0.13 mm ± 0.026 and score were 5.08 ± 2.67 and 5.41 ± 2.51. At week 48, both diameter of seminiferous tubules and spermatogenesis score increased to become 0.18 mm ± 0.029 and 0.18 mm ± 0.026, and score were 7.51 ± 2.14 and 7.57 ± 1.59, During this period, hyalinization and fibrosis of seminiferous tubule occurred. By week 6, the total testosterone, free testosterone, and estrogen hormone levels increased quite sharply and then decreased but still higher than base levels of hormone. In the recovery period, estrogen hormone increased significantly until the end of observation (week 48). FSH and LH hormone levels decreased until week 6, then the FSH hormone levels increased until the end of observation, while the LH hormone level is still lower than base level. Conclusion of this study is the injection of TE and DMPA combination will alter the histological structure of the pig tailed macaque testes i.e. decreasing the diameter of the seminiferous tubules, suppressing spermatogenesis and hyalinisation and fibrosis of seminiferous tubules. The damages of this structure are likely caused by inhibition of feedback mechanism of hypothalamus-hypophysis-testes. (Med J Indones 2007; 10: 137-43) 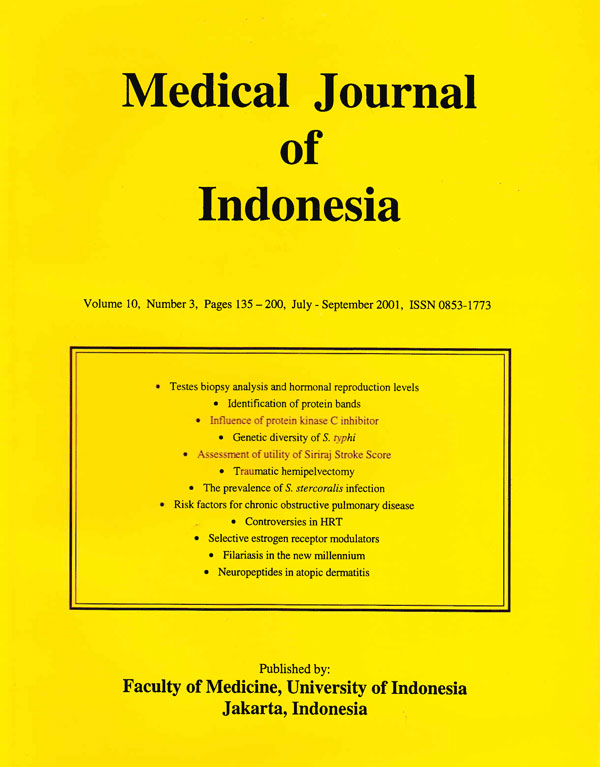