Interaction of erythromycin and clarithromycin with orange juice

Concomitant administration of orange juice with fexofenadine has been found to decrease the bioavailability of fenofenadine to less than 30% via inhibition of organic-anion transporting polypeptide (OATP), a drug uptake transporter expressed in organs such as liver, kidney and intestine. Erythromycin and clarithromycin are substrates and inhibitors of CYP3A4, a drug metabolizing enzyme in the liver and enterocytes, and P-glycoprotein (P-gp), a drug efflux transporter expressed in the same organs as OATP. Since an extensive overlap exists between substrates and inhibitors of CYP3A4, P-gp and OATP transporters, we want to study the effect of coadministration of our local orange (Siam orange) juice on the bioavailability of the above antibacterials. We conducted two 2-way cross-over randomized studies, one study for each antibacterial (500 mg), crossed between administration with orange juice (200 ml) and with water, in 12-13 healthy subjects per study. The serum concentrations of the antibacterials were assayed by microbiological method. The mean (range) ratio of AUC0-t with orange juice/with water were as follows : erythromycin : total (n=13) 81.7 (9.7-193.8)%, unchanged (n=4) 96.4 (80.5-107.9)%, decreased (n=6) 31.9 (9.7-49.0)%, increased (n=3) 161.8 (134.6-193.8)%; clarithromycin : total (n=12) 91.4 (20.6-158.3)%, unchanged (n=5) 103.1 (80.9-123.0)%, decreased (n=4) 34.8 (20.6-64.3)%, increased (n=3) 147.2 (132.9-158.3)%. It was concluded that coadministration of Siam orange juice with erythromycin or clarithromycin produced unpredictable effects on the bioavailability of these antibacterials in individual subjects, with marked decreases in almost half of the subjects, although in totals the effects were not statistically significant. (Med J Indones 2005; 14: 78-86) 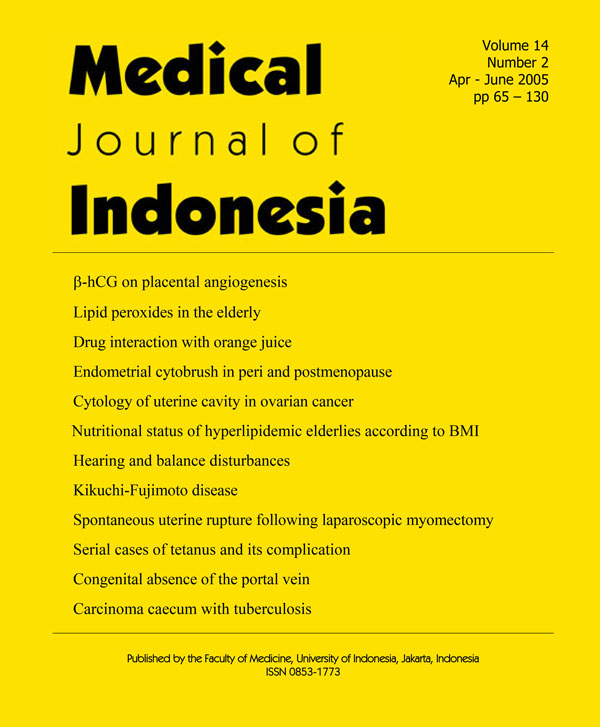