Double blind randomized placebo controlled trial was conducted to evaluate the efficacy of Tranexamic acid in 54 patients with recent hemorrhoid bleeding. Age, gender, body weight, height, grade of hemorrhoid, time of onset of recent bleeding were comparable between two groups. Analysis of haemostatic effect or stop bleeding as an immediate outcome of this study revealed that in the grade 2 patients, 23/23 (100%) of tranexamic group and 18/23(78.26%) of placebo group the bleeding stop. After 3 days of observation, there was statistically significant different for the rate of stop bleeding as well as at the end of observation. Bleeding stop earlier in the Tranexamic group with median 4 days (3-5 days), compare to placebo, median 11(9.55-12.45). Analysis of recurrent bleeding as an outcome of this study revealed that in the placebo group 9/18(50%) of grade 2 patients and all grade 3 (100%)patients suffered from recurrent bleeding. Since the days 4, both group have significant different time for recurrent bleeding and at the end of observation, cumulative probability of free of bleeding between two groups significantly different. Median still stop bleeding in the placebo group was 36 days, and the tranexamic group never reaches the median until the end of observation. Conclusion: tranexamic acid was an effective drug to stop recent hemorrhoid bleeding and prevent further recurrent bleeding, significantly better than placebo. (Med J Indones 2002;11: 215-21) 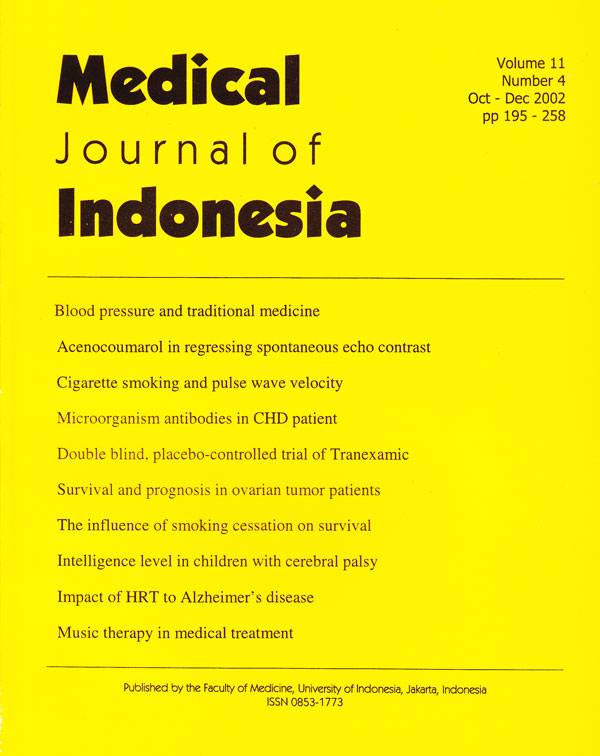