Informations concerning imunological activity in subclinical leprosy is still lacking. Therefore, the objective of this study was to find out the prevalence of subclinical leprosy and interferon- (IFN-) production at several stages of leprosy. This observational study using a cross sectional approach was conducted in Semarang, Central Java, Indonesia. Twenty-six leprosy patients and 62 relatives who lived together with the leprosy patients were included in the study. The venous blood samples were taken from all (88) of the subjects. All of the venous blood samples were measured for IFN- levels by Elisa method. Sixty two blood samples from the relatives who lived together with the leprosy patients were measured for IgM anti PGL-1 to determine the subclinical stage of leprosy. Thus, there were three groups in this study: leprosy patients (LP), subclinical leprosy (SL) and sero-negative subjects (SN). Thirty three of the 62 relatives (53.2%) were in subclinical stage of leprosy, while 29 others were not (sero-negative). There was a significant difference (P= 0.001) in IFN- production capacity among the three groups (LP,SL and SN). Among the three groups, the LP group had the lowest, while SL group had the highest IFN- production capacity. (Med J Indones 2007; 16:224-7) 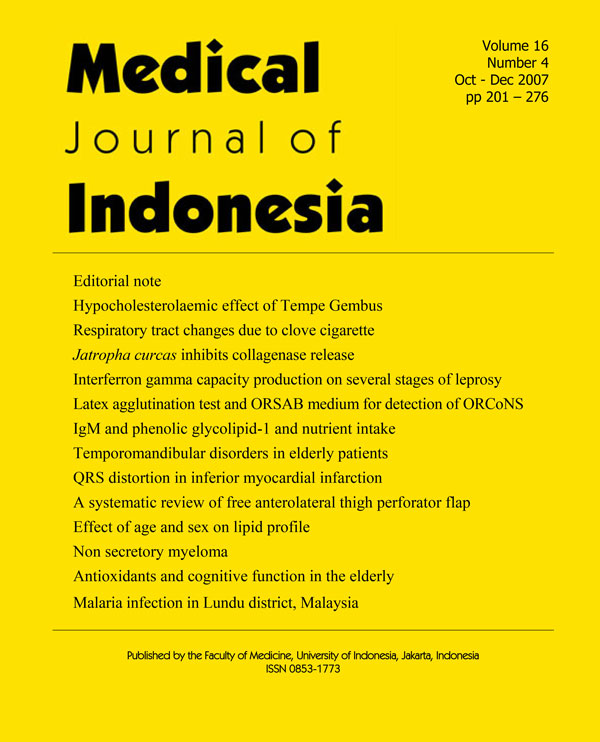