Background: This study was aimed to show differences in the mean values of Collagen I (Col I)/Nitric Oxide (NO), Collagen IV (Col IV)/NO, Tissue Factor (TF)/NO, and P-selectin (P-sel)/NO ratios between patients with DVT and those without DVT, following hip and knee meta-epiphyseal cancellous bone traumatization in major orthopedic surgeries.

Methods: This is an observational prospective cohort study on 69 patients aged > 50 years, who had orthopedic surgery without thromboprophylaxis. Examination of serum Col I, Col IV, TF, P-sel, and NO biomarker levels were performed three times, i.e. before surgery, 72 hours and 144 hours after surgery. We looked for the differences in mean levels of biomarkers, and mean ratio values of the prothrombogenic/antithrombogenic (Col I/NO, Col IV/NO, TF/NO, P-sel/NO) at 72 hours and 144 hours post surgery between patients with DVT and those without. DVT events, which were confirmed at 144 hours post surgery by venography (with the exception of 8 cases where color Doppler ultrasound was done due to contrast usage contraindications).

Results: DVTs were identified in 18 patients (26.1%). There were significant differences of mean levels in pre-surgical Col IV (p = 0.022) and 72 hours NO (p = 0.014) between patients with and without DVT. In addition, between the same two patient groups, significant differences were found in the mean values of the prothrombogenic/antithrombogenic ratios, i.e. Col IV/NO, TF/NO, and P-sel/NO at 72 hours post-surgery (p = 0.007, p = 0.028, and p = 0.049 respectively), with lower median values that were found in subjects with DVT. At 144-hours post surgery, the only significant ratio difference between the two groups was the mean values of Col IV/NO ratio (p = 0.014) with the median values that were higher than the median values at 72-hours post surgery .

Conclusion: The incidence of DVT following traumatization of the meta-epiphyseal cancellous bone after major orthopedic surgeries in hip and knee is influenced by the balance of prothrombogenic and antithrombogenic factors as shown by the significant differences in Col IV/NO, TF/NO and P-sel/NO ratios at 72-hours and Col IV/NO ratio at 144 hours after surgery between DVT positive and DVT negative patients. (Med J Indones. 2013;22:9-15) 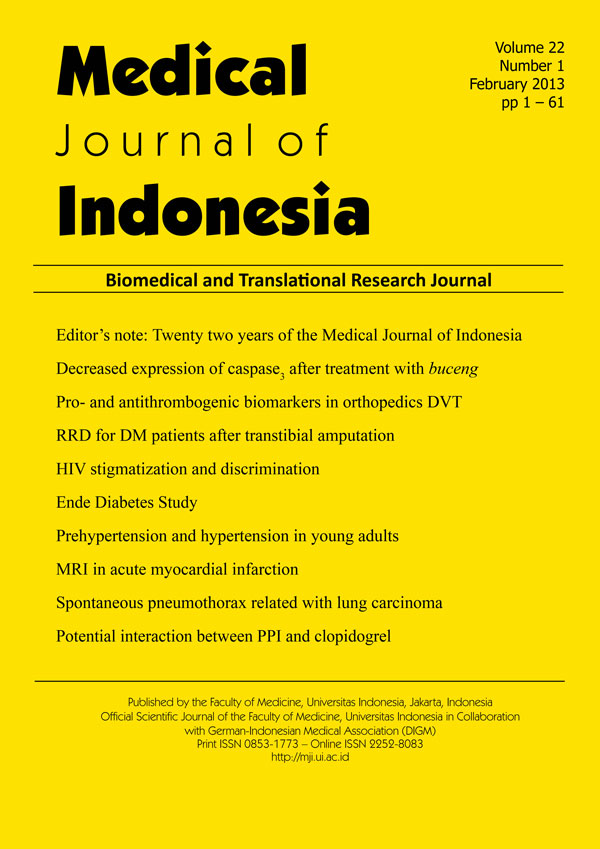 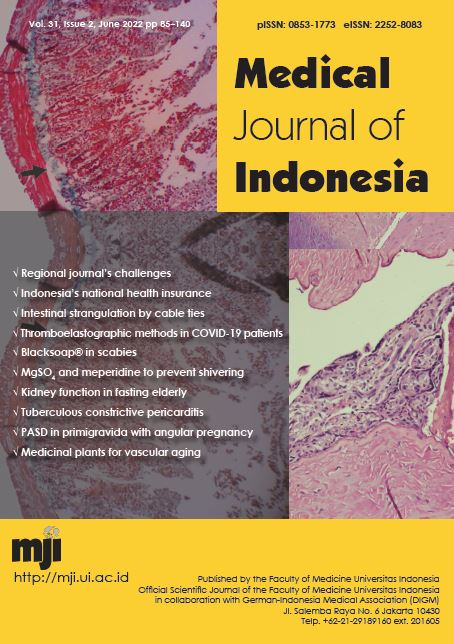