Patterns of bacterial resistance against Ceftriaxone from 2002 to 2005 in the Clinical Microbiology Laboratory of the Faculty of Medicine, University of Indonesia

The spread of drug resistant microbes is a global public health challenge which impairs the efficacy of antimicrobial agents and causes substantial increase in morbidity and mortality rates, including healthcare-associated costs. Monitoring of antimicrobial drug resistance from documented microbial epidemiology & resistance rate is useful in preventing the emergence of resistance. This study reports on the pattern of bacterial resistance against ceftriaxone in the past 4 years. The data were obtained from specimens examined in the Clinical Microbiology Laboratory, Department of Microbiology Faculty of Medicine, University of Indonesia from 2002 to 2005. Microbial species were determined from culture and identification tests. Disc diffusion method was used for sensitivity testing of ceftriaxone to 14 Gram-negative and 7 Gram-positive bacteria. Although resistance rates were increased from 2002 to 2005, resistance rates of ceftriaxone were found to be less than 50%. Low resistance rates (< 3%) were observed for Salmonella typhi, Salmonella paratyphi A, Shigella flexneri, Serratia marcescens, and Streptococcus pneumoniae. These results could be useful in developing guidelines on the use of ceftriaxone in Indonesia. (Med J Indones 2007; 16:3-6) 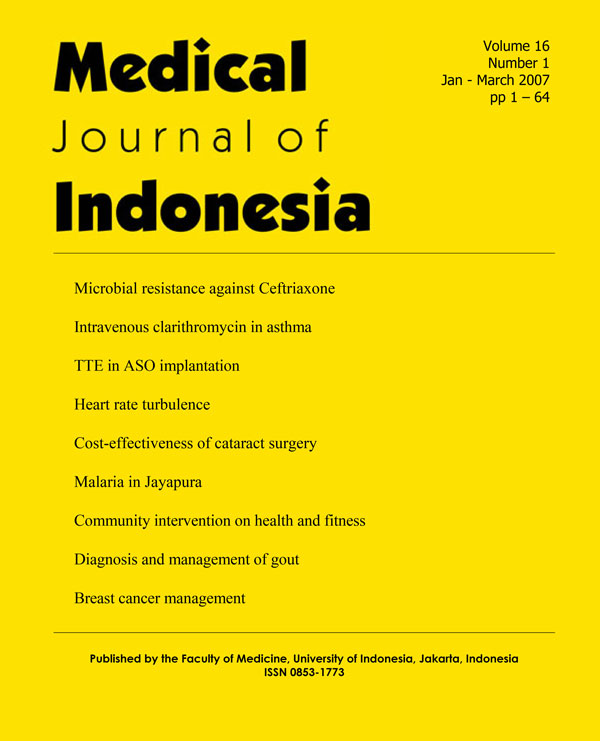